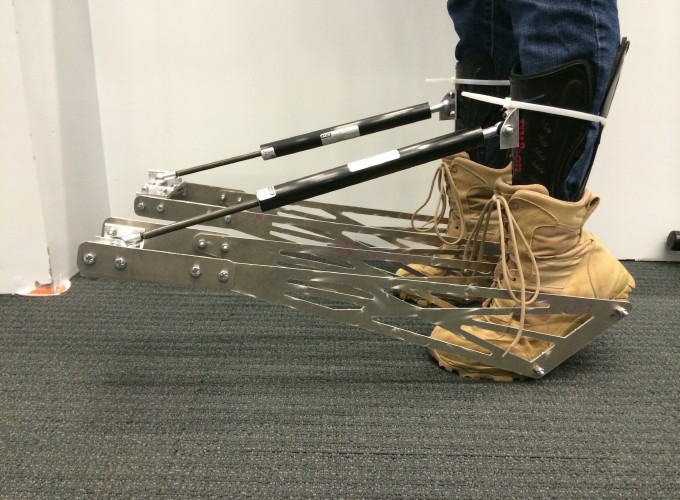 In collaboration with Margaret Coad, Tony DiBlasi, and Christopher Merian.

The human body is limited in its ability to land safely from even modest heights: many lower extremity injuries, such as ACL tears and ankle sprains, occur when the overall impact velocity is too great or when the joints are too stiff upon landing to transfer enough of the impact energy to the muscles.

Because human landing is a biomechanically complex maneuver, involving several joints and many muscles, there exist many possible approaches to mitigate landing injury. For this project, we designed and tested an exoskeleton that augments the ankle (i.e., the joint that absorbs the plurality of the force during a two-foot unassisted drop landing). By adding a damper in parallel with the ankle, the exoskeleton successfully decreased the peak joint torque provided by the ankle during landing.

The device was evaluated using motion capture and ground reaction force data to collect total joint torques and angles for the ankle and knee while wearing the device. The biological joint torques were then calculated by feeding the kinematic data into a geometric model and subtracting the torque output by the device from the total torque.